In 1845, at the age of 27, Karl Marx penned a page of comments on his reading of the Hegelian materialist philosopher, Ludwig Feuerbach. His 11th and final comment translates as:

Philosophers have hitherto only interpreted the world in various ways; the point is to change it.

Wikipedia provides the conventional understanding of these 11 theses as ‘identify political action as the only truth of philosophy. The final and most famous thesis, the one that would become Marx’s epitaph, is here given to mean that ‘philosophy’s validity is in how it informed action.’

This last thesis, ‘Thesis 11,’ would become the dictum of the burgeoning cabal of Marxists in the social sciences during the 1970s. They saw their scholarship as revolutionary ‘praxis,’ believing that the underlying validation of their theorising and research was the extent to which it advanced the revolutionary cause. To them, the praxis of science, like everything else, reduced to the political – which is the politics of historical materialism, the mechanism of the class struggle that determines the course of history.

Like the saints of the Apocalypse, with their pens for swords, these academics worked to advance the coming of the New Jerusalem. And so they despised their liberal colleagues, well meaning perhaps, but only serving to perpetuate the reign of the bourgeois with all its contradictions and class oppressions.

The idea that the validation of knowledge is political was a radical innovation in the modern secular university. But it only really took hold in the social sciences, and only until the 1980s. What I want to do in this post is compare this Marxist theory of science with another theory of science now popular in a natural science. This is the Post-Normal Science (PNS) of Jerry Ravetz that I introduced in a previous post, and which has been used to account for some of the peculiar and apparently anti-science features of Climate Change Science. And in doing so, I will be raising such questions as:

During the last few weeks there have been a number of attempt by AGW Alarmists to reach out to the sceptics. These included two guest posts on Watts Up With That. The most recent, by Judith Curry, discussed how trust in climate research might be rebuilt. Willis Eschenbach’s scathing response – included a wish that the trust in the pseudo-science of climate change is never rebuilt – pulled a chorus of approving comment. The other attempt was by a less well known figure in the climate change debate, the philosopher of science, Jerry Ravetz. It turns out – and I was not the only one surprised not to know this – that Ravetz has been working in the background of this controversy since the mid 1980s. His intervention also drew heavy criticism from Eschenbach, and also from an anonymous blogger known as ‘ScientistForTruth.’

These were indeed two brave essays into this highly charged sceptical domain deserving the interest they received. But it is Ravetz’s intervention that is of particular interest to us here because he is primarily concerned with epistemology and scientific methodology. In fact, Ravetz believes that the conditions of knowledge in environmental sciences are so new and extraordinary that they require a new methodology. Since 1986 (earlier?) he has been advocating this new methodology for environmental science – and most particularly for the science of climate change. 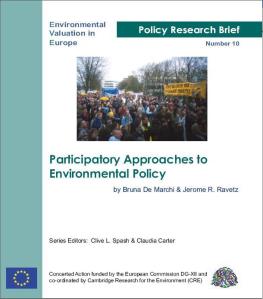 Did Ravetz’s encouragement of participatory science legitimate corruption of scientific processes of the type now under investigation at CRU and the UN?

The new condition of practice prevailing in climate change science is not, as you might have guess, the post-modern condition that Jean-Francois Lyotard, famously describes in his essay of that name (translated in 1984). Rather it is the post-normal condition. And because climate change science is in a post-normal condition, normal science practice will fail. Thus, it is incumbent on scientists to abandon normal scientific practices and turn to this new way of doing science. Radical stuff! But was anyone listening?

Well apparently some were. A number of the prominent advocates of AGW, including Stephen Schneider, Hans von Storch and Mike Hulme refer to Ravetz approvingly. Von Storch and Hulme recognise climate science to be in this post-normal condition, and, in different ways, they support his call for a methodological revolution (watch this blog for more on their interpretations of PNS).

Now, it has always been my view that down through the history of science the various popular philosophies of science have rarely affected a direct and intended influence on the practice of science – they remain little more than a sideshow to the course and nature of its advance. Newtonian science may have been marketed on the continent as the marvellous product of Lockean doctrine of no-innate-ideas and all-we-know-arrises-from-the-senses. But in practice Newton’s mathematical investigations were another story. One exception to this rule is the German philosopher and physicist, Ernst Mach – with his strict alignment of knowledge with experience he seems to have influence the heated debates of a century ago in theoretical sub-atomic physics – and maybe you could make an argument for Karl Popper with his (new?) method of falsification. But here with Ravetz we may have another exception. Well, that is, if the blogger ‘ScientistForTruth’ (SFT) is right about his impact on the most controversial science of our day.

In a posting prior to Climategate (Climate Change and the Death of Science) and in the WUWT controversy, SFT argues that the methodological recommendations of Ravetz (and his colaborator Silvio Funtowicz) has influence climate change scientists so as to legitimate the corruption of normal scientific practices by political practices and outright activism. PNS promotes just the sort of corruption of normal scientific practices that are now under investigation at the University of East Anglia and at the United Nations. END_OF_DOCUMENT_TOKEN_TO_BE_REPLACED